#futureschools Part 1: What I spoke about

This week, I was lucky enough to travel to the beautiful city of Melbourne (where good food and coffee runs rampant) in order to attend the Future Schools conference. In reflecting on the two days, I’m going to break this blog post into two: What I spoke about, and what I learnt.

Last year, in my previous job as Innovation Co-ordinator, I was as 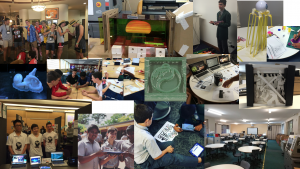 ked to do a 20 minute speech at future schools on “making drones, robots and makerspaces”. Having set up a few makerspaces now, I still spent a long time trying to figure out what to talk about. I’m not a big fan of talking about myself, and there was so much that we did at Marist, to put it into a 20 minute speech would sound like a list of “here’s what you can do with STEM”. And this list already exists. (Thanks to our Chief Scientist…a much smarter person than me) Em

So, I decided to flip it and talk about all the mistakes we made.  Here’s the crux of my speech, which I retitled: “How to fail at: Making drones, robots and makerspaces”.

Stay tuned for part 2: What I learnt at Future Schools

1 thoughts on “#futureschools Part 1: What I spoke about”