Three years ago, my then 10 year old year 5 son was excited by his teacher’s announcement….they were allowed to bring devices to school. Back in the olden days of (3 years ago) they actually called these computers, and as the son of two technology teachers he has access to a lot of technology at home. We have more computers in our household than people. Each of us have an ipad, an iphone, and at least one computer. We have coding (then called programming) days at home with the three of us. We had a few options for him to choose a device to take to school, and we were not about to buy him a new one. Luckily for us, unlike what I advocated at the time as easier for teachers, his school had decided on a BYO anything policy, so we were allowed to choose any device for him to take to school.

After years (pre-the National Secondary School Computer Fund) of advocating for schools to implement 1:1 programs, and being a part of the decisions made at a number of schools, and system levels, my son was finally in a position where he could take his device to school. But what device? Here, I did what any person in my position would do….I took to facebook to ask advice. Unlike most parents however, I had access to some of the greatest minds in this space. Friends that worked at Microsoft, Apple, HP, Intel, the president and president elect of the ACCE, ICTENSW board members, people that wrote the “Computing Studies” Syllabus from the 80’s, as well as the new curriculum, NESA technology advisor, IT sales people and technicians. Normal parents have access to this kind of advice right?

The post has almost legendary status, with 207 comments in advice from people, as I decide whether to send him with a Microsoft Surface or an ipad.

When I finally decided, after much consideration of a number of issues, including the ability to be cross platform, to have a device that wasn’t seen as a gaming device (which his ipad was) and the use of a proper keyboard, with a proper operating system, we made the decision to allow him to take a windows surface to school. Luckily, I had purchased one of these to try out video annotation recording for work, and it had hardly been used. So, he took a device worth almost $2000 to school. Well, we decided that this was the device that he would be taking to school. ..it was all very exciting for him and for me.

Not so for my husband….

And so we waited for his teacher to tell him to bring it in.

And waited some more.

Easter came and we waited.

Term 2 came and we waited.

The technology teacher in me was frustrated as every time I asked him whether he was taking it to school or not, you could see the disappointment in his eyes.

It was the last day of term 2 that he was allowed to bring it in….for a research task for History.

My issue, aside from the lack of use of technology in year 5, with technology in the syllabus, and the great opportunity of student engagement, was the fact that there were about 120 students in year 5 this year, all asked to buy a device, a significant investment, 6 months before they ever even thought of using them.

He took it in a few more times in year 5, not enough to justify a purchase of $2000 or even $400 for a basic chrome book. Then, same thing in year 6 and then again in year 7.  The next conversation came the other day about his homework….could he use his phone to add reminders (which he uses very effectively) to put his homework into his phone….no, he’s not allowed to use his phone in his science class, where all the homework is set. What about you take your ipad instead? No, can’t use your ipad in science, the science teacher says that there’s no need for technology (in science????). So, we now have the point where he doesn’t take his laptop to class, because most of the time it’s either not allowed or not needed.

In the age of new technology, I realise that it’s important that students hand write in books, read real books and communicate with each other. But there’s also an importance in learning how to drive a computer….really drive, not just email and facebook. There is no such thing as the digital native any more….students are losing computing skills by the as they play fortnight and snapchat each other. They can WASD like no one else, but ask a student to save something to a USB, and they look at you blankly.

How does this relate to teaching?

Lets think about things from the parent perspective. How can we ask parents to spend money on a device that then we don’t let students use in the classroom.

Looking at the student’s future…. how are we using technology in the classroom to work beyond a content delivery device? Are students just using their very expensive laptops in order to do a google search they could do on their phones?

Looking at how we use technology as a teacher…..are there opportunities where we could more effectively utilise technology….how can we move to redefining the task? 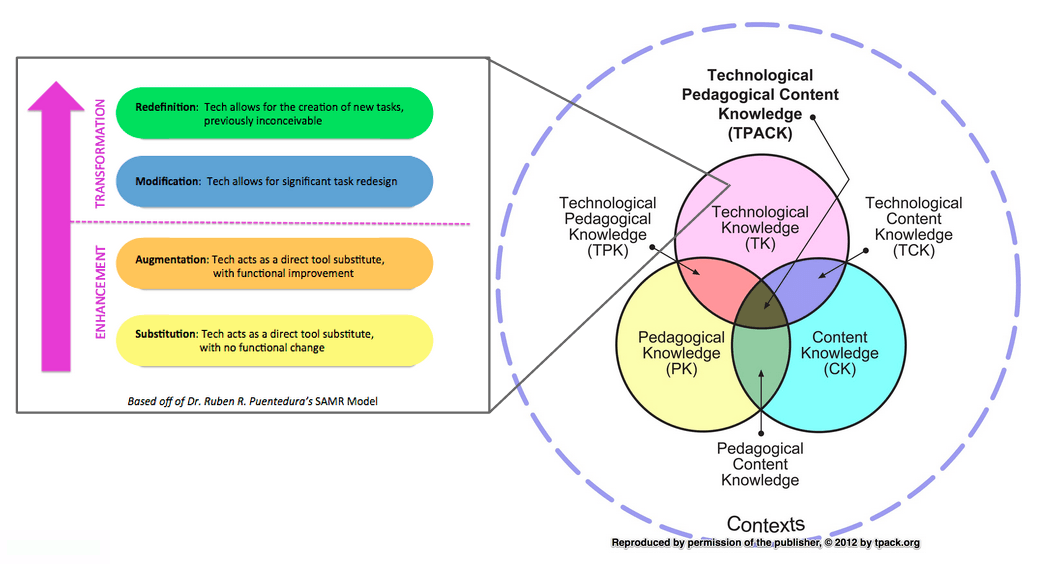 I thought then about what I could say to my son’s teachers to get them rethinking the use of technology in the classroom. One year I decided to throw in my laptop for two weeks when we implemented an iPad program to see if I could do everything I could do on a laptop with an iPad.

Can you then, if you have finally gotten through my ramblings, think about the following challenges to see if you can moderate your practice to include more technology:

And when you’re thinking about this…think about that kid that’s so excited to bring his laptop to school, who then gets the forty pages of photocopying to put in his book every day. And about the parent who purchased an expensive paperweight.