15 years ago, I vowed never again to go to camp

15 years ago, I vowed never to go to camp again.

Last time I went it rained for three days straight. Everyone was miserable. The instructors claimed that there’d never been a camp that was so bad.  I didn’t find out until later but I was pregnant at the time, and the bouts on the giant swing wasn’t helping my general attitude of just feeling miserable.   Then, the year co-ordinator and her mates went off to the pub and left me and another teacher with 180 soaking wet and miserable year 7 kids. I came home, walked in the door, went straight to bed and told my husband “I’m never going to camp again”.

This year, I was put in the position of having to go to year 8 camp.  I tried as hard as I could to convince people that it wasn’t worthwhile sending me.  My problem is that I find it difficult to say no. But there was certainly a lot of (not subtle) hinting.  “There’s a meeting on that day that’s really important” was met with “you’re going to camp”.  “This person is coming out to visit today” was met with “you’re going to camp”. A workplace injury happened a week too early, and although it was difficult to walk up the hills while I was there, and I had to miss out on the archery (too much of a hill for me recently damaged knee) I was still healthy enough to go to camp. Damn. 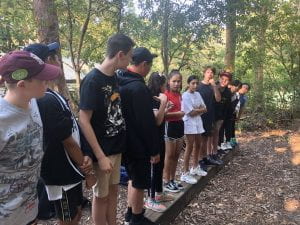 What I had forgotten to factor in is how wonderful our staff and students are. Students who were carefully selected to be in groups with only one of their friends supporting those students who they would normally have nothing to do with. The moral support of encouraging someone to jump of the edge of a pole (while fully harnessed) astounded me. It broke my heart and I nearly cried when one of the girls in year 8 got stuck at the top, and regardless of the sound of all the encouragement below, she could not jump. The instructor had to go up and get her. She then jumped down with his encouragement and made it to the bottom in sobbing tears. Every student in the group hugged her. She then bravely announced that she would do it again, and proceeded to jump up to the pole again.

I was so encouraged by the way that students were treating each other and the staff. Even me getting students out of their room at 10 o’clock because I put the potentially noisy group next to my room was met with politeness. “I’m exhausted” I begged….”please let me sleep”. They must have sensed that I was on the edge of losing it, or they were really very considerate because they didn’t make another sound all night. Might have also been because I quoted some things that they said during the last half an hour (who brings Monopoly to camp?) as the walls were less than paper thin.

It was interesting how student perception of staff changed over time also. My first bout of laser tag saw me asking the team with the least people on it if I could join them. I can’t run, with this knee (from my injury) but I can shoot. A student looked me up and down, sighed loudly and said “I suppose”. My limping through the field yelling “someone shoot Mr Whitman” and my score of 144 (even though Mr Whitman’s team beat my team every time) must have earned someone’s respect, because on the next game, I asked a totally different group which team I could join, and they were elbowing other student’s out of the way to get me on their team. Feel like it’s taken me forty years to be selected first on a sports team.

Looking back to my previous camp experience, aside from the weather, the main difference would have to be the staff. I’m constantly astounded by how amazing St Luke’s staff are. We talk about “open to learning” and “willing to work hard”, and this comes through in all facets of working with St Luke’s staff. I do not know what it is, but it’s something special. Maybe it’s our size, while our SOL staff is still small, but I’ve never worked at a school before where every teacher is just brilliant. I hope it lasts.

All in all, I don’t think I’ll wait 15 years to go again. I’ve booked in the camp for next year. But a week later I’m still exhausted….so maybe if I start hinting now….

Category: Uncategorized | 1 Comment on 15 years ago, I vowed never again to go to camp